These pillows are soft, yet offer good support. Good for a side sleeper like me

S
Sunday Memory Plus 4 Mattress S.S.
Happy with the mattress

The mattress is very good and comfortable. Loved it a lot.

I did a lot of research before the order and finally ordered the Sunday Mattress.
It definitely seems too soft a little more firmness would have been great but nonetheless it is still a great Mattress.
You have 100 days to test if it suits you, i am still at my 21st.

A
Sunday Latex Plus 4 Mattress A.D.
Comfortable and Value for money

We did a lot of research while choosing the mattress and finally bought the full 8 inch latex mattress from Sunday. Other brand mattresses are a bit cheaper since they are not full latex and the ones which claim full latex are pretty expensive. The best part about Sunday mattress is the no questions asked 100 days replacement guarantee. It did take some time to deliver because of the lockdown, but the wait was worth it. The mattress is very comfortable and a value for money deal.

An excellent topper which can make a coir mattress into a luxury mattress. I have a combo of luxury pillow and mattress topper now which makes my sleep far more comfortable than ever before. I have purchased this and received it in a most beautifully packed condition.

Good protection for the mattress

the Very First day i found very difficult to sleep on my new mattress, as i have foam mattress earlier. I thought of giving one more day a trail and i did. and you know what from that day to till now i am very happy of this product, i am having a very sound sleep and my wife also telling that these days am good in sleepas because earlier i was lite sleeper( which means i woke up for every 2 hours and that make disturbance to my wife) but now i was fully happy and satisfied with my quality and quantity of sleep.
It has very right level firmness and support, and due to very good quality of latex on top layer that doesn't disturb other who is next to me.
thanks for the Sunday Mattress for making such a wonderful mattress for every day usage.

The product is great. The delivery experience was very good.... and fast too.

In This lock period I ordered Sunday mattress to VIJAYAWADA which is under containment zone.I received the mattress feel happy with this mattress while sleeping because I suffers with lumbar spondylitis.very good packing.Thanks to Sunday mattress once again.

Right combination of firmness and comfort. Good for both adults and older children. Got one for my daughter, son wanted one too, so purchased a second one. By the way there is a strong smell on unpacking, not too unpleasant, which thankfully goes away after a few days of use. Did have to keep the windows open and the mattress uncovered for a couple of days, during the day time, to help the process along. 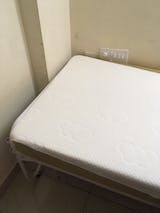 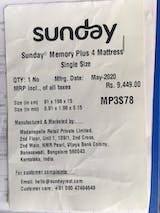 I received it late due to Covid lockdown, technical team has been patient and assisted with delivery.
Now to the mattress, I have a mixed feeling. It is soft but not too soft. Size was not what was said even after 10 days. There are gaps around my bed of atleast 2-3 inches. Mattress was not delivered in a straight upright position. It was bent in the middle by the delivery person. Don't know if that would reduce the life of the mattress or not. Still I am having a sound sleep and my kids love it a lot. But its edges need to be a bit hard I feel as due to its softness one may fall.

I have been trying to purchase best mattress for my father who is 64 years old. As you become older, the amount of sleep will be reduced to 4-5 hours only. So, I have decided to provide a mattress with extreme comfort which allows for sound sleep of 4-5 hours. I have tried many mattress like Kurlon, Century, Sleepwell and Wakefit as well. But this Ortho Plus mattress from Sunday Mattress fits the purpose perfectly. Sunday Mattress , thanks for putting lot of effort and research behind the design so that the comfort is ensured and YOU HAVE HIT THE RIGHT SPOT. This may be the best FATHER'S DAY GIFT ever I can give to my dad. Thank you

Good One at Good Price....Awesome..

It has the right level fo firmness for support and comfort. Very comfortable for any type of sleeper. Happy with it so far. I bought a sunday mattress protector I got a good quality protector with correct size and less than what I paid for my earlier protector which I bought from Amazon.

Very happy since I have been using Sunday mattresses for the last four years. I developed backpain after using some other brand Ortho mattress. After changing to Sunday's Ortho Plus, no more back pain. I have now bought three more Sunday mattresses. Thanks Team Sunday

Lovely product on bed to relax , just a step away from sleep.

Had not received it's been a month

"With Sunday Mattress Every night you sleep like it is a sunday" probably it was named after this reason. After lots of research i thought of getting a sunday one year back but, dropped the idea and went for peps mattress which is better initially but faced back problems as time passed by. Then i took a look at ortho mattress in peps and found very expensive, greater than that, i feared that what if the new peps also give same experience. So i started research again and gave a thought to duroflex, kurlon, sleepwel, emma, wakefit, springfit and so on. And Finally this time i don't want to take a chance , despite some negative reviews, somewhere in my mind i feel that i won't regret choosing a sunday mattress and purchased an Orthoplus sunday, recieved it yesterday, the quality was amazing, it might be early to judge about comfort but i strongly feel that i won't regret for reviewing early and it would make me forget about those 100 nights. Initially at the time of purchase there's a little confusion, and timely help from sunday team made me solve it. My whole hearted thanks to Mr.Manohar(customer care executive), Mr.Aditya, and Mr.Alphonse reddy who assisted through this.

One can blindly chose sunday and even if you have issues do not worry, you would be definitely helped out by the wonderful team. 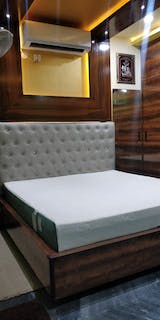 Really enjoyed both the product and the service.

I bought the 1st sunday mattress some time Oct 2019. What impressed me the most was the straightforwardness at the show room and the way they handled the 100 day trial period. I was not comfortable with the first choice I made (latex which did not suit me), the replacement was swift and hassle free. The Ortho mattress was perfect and I had very comfortable usage. So this May i decided to replace rest 2 bedroom mattresses. Again the product was excellent and service of high professional standards

N
Sunday Ortho Plus 4 Mattress N.G.
Perfect for back support

It has the right level fo firmness for support and comfort.

Copied!
0
Days
9
hours
56
minutes
59
seconds
The offer is valid when the order contains a Sunday mattress & a Delight Pillow (standard). This is a limited period & limited stock offer. This offer cannot be clubbed with other offers including 0% EMI, Friend referral etc.
Avail
Oops, something went wrong!
Looks like you did not manage to share the video. We will only share the Sunday video and do not have any other access to your account or data. Click on "retry" to avail the cash back offer.
retry
close